My name is Kate and I have been married to my high school sweetheart, John, for 34 years now. When we were first married, we lived in Northern Maine – small town called Madawaska. We moved to Northern Virginia so John could pursue his career in police work. On April Fool’s Day, 1980, I became a born-again Christian! John and I tried to have children for eleven years! It was not until we moved to Louisiana that we were blessed with our first son, Aaron! Words cannot express how overjoyed John and I were. Five months after Aaron’s birth, my husband accepted Christ as his Saviour. In 1986, we moved back to Virginia where John accepted a position with a local police department. We had our second child, Adam, in 1989.

Aaron (now 26) served a Specialist in the U.S. Army. Aaron accepted Christ at 6 years old! Such a young boy but a tender heart! Having been saved at an early age, he has had the blessing of the Holy Spirit directing his life. He has been a faithful son with a teachable heart. Raising him was an absolute joy! 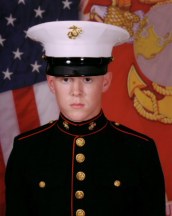 Adam (now 22) served as a Sergeant in the U.S. Marine Corps.  He is married and has a beautiful little boy named Ethan!  He has quite a testimony! It is but the grace of God that he is where he is today! Adam was born again when he was 9 years old. He’s had his bumps in the road but the Lord had His hand on this young man! To God be the glory, great things He hath done! 🙂

You can’t tell we are proud parents, can you?

John was diagnosed with colorectal cancer in February 2008. The terms radiation, chemotherapy and surgery are now part of our lives. This is not something we ever thought would happen to us – at least not at this time in our lives. John was a police officer since 1975 and had just put in for his retirement, which was to happen May 2098. In preparation for John’s retirement, we sold our house the previous October and had downsized to a two-bedroom apartment while we were waiting for the “big date” to move to Oregon!  The treatments and ileostomy reversal surgery were finished in mid October and we moved to Oregon in November 2009.  Since then, both our sons decided to move back to the East Coast and so did we.  We are now living in Virginia again and our family is once again together!

We are so thankful that God saw fit to allow us this trial at this very moment in time. Had we already moved, we would not have had our precious church family’s support or the support of our long-time friends. We would have been in a new area and not have been able to get the good doctors and hospitals we have here, nor would we have known our way around. God is so Good and He has blessed us beyond measure thus far! I look forward to sharing more praises and blessings as we go forward for Christ!